“India is set to be a strong developing market,” says Södra Sales Manager in Asia, Christer Bladh, who has recently attended the DelhiWood 2019 event.

India, like many Asia countries, was a dedicated hardwood user, considering softwood to be an unsuitable substitute. “Discussions at DelhiWood confirmed that perceptions are changing in India, just as they did in China, where we were in the same position at the beginning of this decade,” adds Christer.

The strength and workability of spruce and pine mean they are becoming much more widely accepted in India. Volumes remain modest at the moment, but furniture, doors and pallets are now common applications and as a growing professional class begins to seek better quality products, so the higher-quality softwoods from Scandinavia and Canada are being more appreciated and demanded.

As for construction, there are also developments and potential. “With pressure treatment and other suitable preventative measures against indigenous pests, softwood is generating interest for above-ground building and being accepted as an alternative material to concrete and hardwood.”

“We are doing business in India but it will be a while before we see significant volumes,” says Christer, “and the tightness of supply in 2018 meant we were not in a position to develop this market very much. I see it ramping up however, and with time India will develop strongly. It’s the next China.” 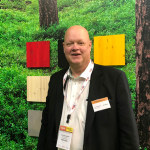